FCPM is the abbreviation for Fluorescence Confocal Polarizing Microscopy, a very powerful technique to visualize the director field in three dimensions. It combines several microsope techniques: Optical polarizing microscopy, fluoresence microscopy and confocal microscopy. The most important features of this methods can be found below. 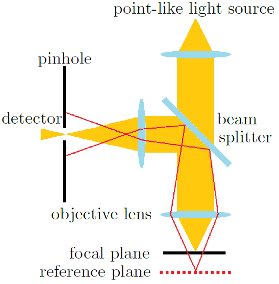 Schematic working principle of a confocal microscope: Only light from the focal plane can pass the pinhole, light from other planes is blocked.

The confocal microscopy technique was invented in 1955 by Marvin Minsky. It offers to resolve images not only latteraly, but also axially and the basic principle remained unchanged since then: Light of a point-like light source (e.g. the aperture of a laser) is focused onto the sample using a high aperture objective. The reflected or re-emitted light is then collected by the same objective and focused on a pinhole, which is located in front of the light detector. With this setup, only light from the focal plane of the objective can pass the pinhole, while light coming from other planes will be filtered by the pinhole.
Confocal microscopy is a scanning probe technique, which requires a point by point measurement and does not give a direct image of the sample. The magnification is therefore determined by the scanning area, not by the magnification of objective. The resolution in confocal microscopy depends on the numerical aperture

of the objective, the wavelength

of the light source and the diameter of

of the pinhole. The maximum theoretical lateral resolution improves by the factor

compared to a conventional brightfield microscope.

to the long axis of the dye molecule is known, the detection of fluorescence intensity between crossed polarizers allows a 3d-imaging of the director field distribution.
As can easily be shown, the detecable light intensity scales with the angle

between the excitation light and the transition dipole moment

The high sensitivity of

allows the detection of even very small director field fluctuations. Four fundamental orientations of dye and excitation field are shown in the figure below. In cases where

is perpendicular to the plane of polarization of the exciting light, no fluorescence intensity can be detected. For parallel alignment of

, the maximum fluorescence intensity can be detected. In the general case of arbitrary orientation of

, the intensity scales by

Illustration of the angle dependent fluorescence response in FCPM measurements.

, as described in the section The electro-optic effect.

Experimental FCPM series of the Fréedericksz-transition. With increasing applied voltage the molecules rotate from planar (bright) to perpendicular (dark) and the FCPM images reveal the axial director field distribution.