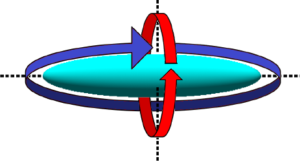 The uniaxial nematic order imposes an orientational potential on the molecules, which increases the number of relaxation modes. While the rotation around the long axis is barely affected by this potential, the relaxation mode around the short axis splits up into three distinct modes. Two of these modes are tumbling modes and account for an oscillation and precession of molecules without changing the molecules orientation. The third mode represents a rotational fluctuation around the short axis, which results in a switching of molecular orientation by 180°.

Schematic illustration of the four fundamental molecular relaxation modes in the nematic phase. The uniaxial orientational order is depicted by the stripes in the background. Mode (a) corresponds to fluctuations around the long molecular axis and is unaffected by the nematic order. Modes (b) and (c) represent oscillation or fluctuation movements within a single potential well, while mode (d) depicts a switching between the two potential wells of the orientation potential.

Very often people get confused about the fundamental difference between relaxation modes (c) and (d), as shown in the image above: It might appear that (c) and (d) depict the same mode, the only difference being the extent of molecular fluctuation. This is, however, not correct at all! Mode (d) represents rotational fluctuations around the short axis and only in this mode the longitudinal part of the molecular dipole moment changes direction from parallel to antiparallel. This mode therefore constitutes a mechanism for storing energy in the material upon applying external electric fields, and significantly contributes to the permittivity of the material parallel to the director.