The states of matter - What are LCs?

iquid Crystals (LCs) are often referred to as the fourth state of matter. In order to understand what liquid crystals are, it seems convenient to have at first a look at the other three states of matter and what distinguishes them. The three classic states are the crystal state, the liquid state and the gas state, where the building blocks of matter, i.e. atoms and molecules, are arranged with different degrees of order.

The crystalline phase is the highest ordered state and shows a long-range positional order of its constituents as well as a long-range orientational order. In other words: Every building block has a fixed position and (for anisometric constituents) a predetermined orientation within the three-dimensional crystal lattice, there is no freedom to move to another position or rotate. As a consequence, crystals appear solid, they remain their shape. The crystal state appears at low temperatures. 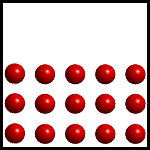 Increasing the energy in the system leads to a melting of the crystal and the formation of the liquid phase. The liquid state is characterized by the complete absence of long-range order, the constituents can arbitrarily move to any position and the liquid state appears fluid. Fluidity, however, does not forbid the formation of short-range order, which may arise by attractive interactions between the building blocks. Prominent examples for this short-range order are the H-bonds between water molecules, which are responsible for many unusual properties of water (an iceberg floats in the ocean due to an anomaly in density, high surface tension of water). Liquids can easily be deformed by external forces, but do not exhibit anisotropy physical properties. 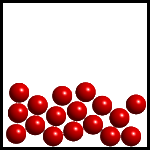 The gas state is the classical high energy state of matter and characterized by the absence of long-range and short-range order. Unlike the solid and liquid state, where the building blocks are in permanent contact to each other (condensed), the constituents move randomly and with arbitrary orientation through space, with a high rate of collisions with each other. 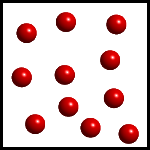 For strongly anisometric molecules (e.g. rods, disks) a fourth state of matter can be observed, the liquid crystal state. It features a long-range orientational order and a reduced (or even absent) positional order of molecules, thus it exists between the crystal state and the liquid state. Depending on the degree of positional order and whether these phases form at certain concentrations or temperatures, a distinction between numerous liquid crystal phases exists. However, the most widely used LC phase is the nematic phase, which is also the least ordered LC phase with long-range orientational order only: Although being fluid, all molecules point on average to the same direction.

The molecular order between Crystal, Liquid Crystal and Liquid decreases with increasing temperature.

As a consequence of this molecular order the LC state combines the appearance of liqiud and crytsal. A crystal with multi domains appears opaque due to internal domain boundaries. Yet, it is solid and remains shape. The liquid crystal show opacity also caused by internal boundaries between domains with different orientation, but it appears in a fluid state. The liquid phase on the other hand does not exhibit ordered domains and therefore appears transparent while also being fluid.