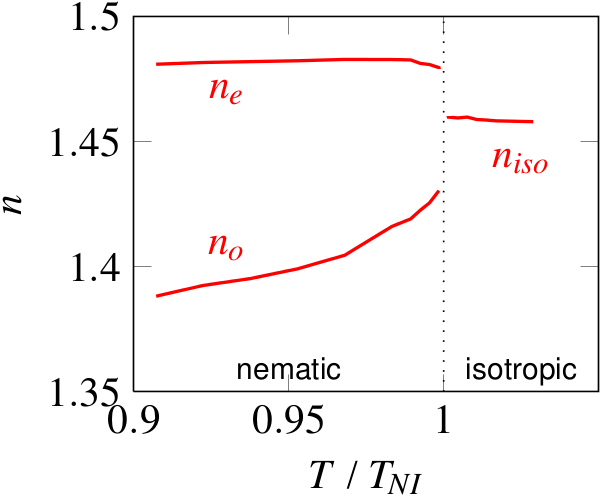 A nematic liquid crystal is an uniaxial birefringent medium with the optical axis parallel to the director n. The two principle refractive indices are given by

, the birefringence is given by

of nematic liquid crystals are 0.05-0.45.
The optical axis of the nematic phase is parallel to the director n, whose distribution can be strongly distorted in a given volume

for linearly polarized light passing through the liquid crystal therfore also depends on the director field distribution. It can by described as

can be influenced by external electric fields, so that the effective birefringence of the nematic liquid crystal can be controlled electrically. 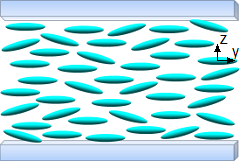 passing through the sample along the

-direction with the orientation of the electric field

under an angle of

. At sufficiently strong external fields, the initial alignment is distorted and the director describes a function

.
This does not affect the ordinary refractive index

, as the director remains perpendicular to the

-axis. However, the extraordinary refractive index

In consequence, also the effective birefringence

depends on the angle distribution

and decreases with increasing field strength. The total phase retardation between ordinary and extraordinary beam passing through the sample in this geometry is given by 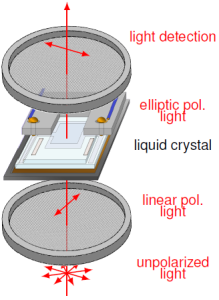 In order to detect the effective birefringence of the sample, a polarizer can be placed behind the sample under an angle of 90° with respect to the initial polarization state of the transmitting light. The detectable light intensity is then given by equation

is the initial light intensity. According to this equation the maximum light transmission between crossed polarizers is given for

and the field-dependent light transmission is an oscillating signal. The contrast ratio between

is not limited in theory, but usually restricted in experiment by the quality of the initial director orientation.